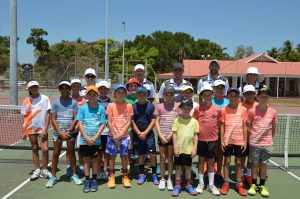 Super 10s is an exciting competition for boys and girls who are born between 2006 to 2008.

Tennis NT, along with local coaches select up to 4 boys and 4 girls to represent Northern Territory at the Talent 10’s National Event in Melbourne (January 2018) where they will be split into teams with other players around Australia.

There are two seasons within the NT, both running over a 4 day periods. Tennis NT put together 4 different teams, consisting of 5 players per team for both seasons. From this event, 16 eligible players are selected for a talent 10’s camp over two days where players will compete for their place in the National Team.

A very exciting opportunity for all players involved.

When can I Play?

What programs can I do?

Get Started with your FREE introductory lesson today!

The coaches are very friendly so the kids enjoy themselves very much. They are flexible and make times available to suit us. Their holiday program is also great. - Japanese Group See all testimonials